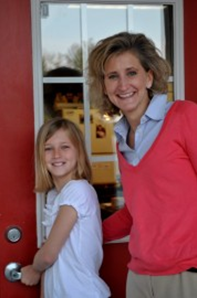 Despite his or her best efforts to convince you otherwise, your teen needs you and enjoys having you around. The statistics below back up this idea:

“In one study, 84% of teens agreed with the statement that they think highly of their mother. More than three-quarters of teenagers (79%) enjoy spending time with their mother. Eighty-nine percent of teens think highly of their father.Seventy-six percent enjoy spending time with their father.” (Parenting the Teenage Brain, Fenstein, p. 21)

During the teen years, child-parent relationships can impact a teen’s grades, social abilities, attitude towards drugs and alcohol, and tendencies toward other risk taking behaviors, for better or worse.

In parenting, there are three main styles that have been identified. While every parent and child relationship is different, researchers generally agree that the characteristics of one of these parenting styles is linked to greater emotional well-being and personal responsibility for teenagers.

Parents in this category listen to their teens and take their thoughts and feelings into consideration when making decisions. As parents, they reserve final say because they are the ones more capable of using the frontal lobe that helps in reasoning and logical decision making that often eludes teens. They model these thought processes for their teens and invite their children into the discussions, thus helping their teens to develop those logic and reasoning skills. Authoritative parents encourage their teens to make choices and take responsibility for the consequences, be they good or bad, all while continuing to manage those decisions their teen is not yet ready to handle independently. An authoritative parent is aware of who his or her teen is with, where that teen is, and what that teen is doing. Authoritative parents also recognize when it is time to adapt to their child’s ever-changing needs. This parenting style, in summation, is vigilant, yet democratic.

Parents in this category can be heard to say, “My house, my rules” or “My way or the highway.” Decision making rests solely with the parents with little or no regard for changes in the adolescent or demonstration of logical decision-making or reasoning skills. Parents in this category often do not feel they need to “explain themselves” to their children. Teens who have authoritarian parents are at a disadvantage because they do not practice the decision-making skills that can be an adolescent’s greatest weakness and they can become concerned only with the external consequences of inappropriate or immoral behavior not the intrinsic motivations of appropriate behavior.

Permissive parents can be either neglectful of or spoil their children. This style is characterized by inconsistency and is often marked by parents who wish to be friends with their teens or who are intimidated by their teen’s emotional amygdala-centered responses to their environment. The result of this parenting style is confusion and feelings of insecurity and rejections for teens.

Researchers have found the authoritative style of parenting to be the one most linked to a teenager’s overall sense of security and well-being. This style continues to offer adolescents guidance while providing them with explanations and modeling of the skills they will need on their own in the future. Always remember that teens have many friends, but only one set of parents and they need you as much as ever!